It’s just under 3 months since we launched Zombies, Run! to the world, and there’s been plenty of surprises and excitement since then. But by far the most gratifying thing about releasing the game has been the overwhelmingly enthusiastic response from our players. You’ve been leaping on every opportunity to tell your own Zombies, Run! stories, produce wonderful artwork and get involved in the game’s world as much as you can. We’ve loved every piece we’ve seen, so we’re going to share some of our favourites.

To start things off with a bang, here’s a wonderful art-nouveau-inspired poster for the game by Phantoms Siren. 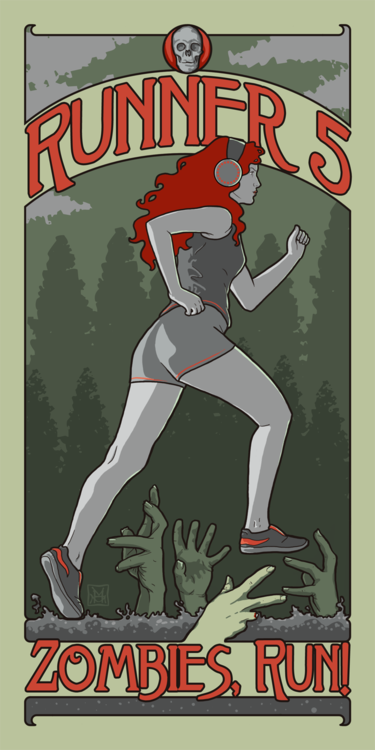 We love the way this recalls old horror film posters with the lunging hands and limited colour palette, playing that off against the modern clothing and oversized headphones of the runner. It really sums up the core of Zombies, Run: old-school horror meets modern tech. Excellent work.

Following that, take a gander at the first piece of Zombies, Run fanfiction we received. It’s a touching piece exploring the relationship between Sam and Doctor Myers, and it created quite a reaction in our lead writer, Naomi Alderman. Great job, Nextian!

Delving deeper into the burgeoning ZR fanfiction community, here’s a great short piece by clicketykeys that gets right to the heart of the debate over which weapon’s the best for the Zombie Apocalypse. You might write a great story, clicketykeys, but you’ll never convince Jack you’ve found a better weapon than W.G!

Of course, Runner 5’s faithful radio operator Sam Yao has received plenty of love from the fans, and we think this piece by eyesfilledwithstars is a lovely expression of how much Sam means to Abel and to the fans.

There are plenty more fantastic pieces of ZR fanfiction out there, and we love all the stories that our fans are telling, and we can’t possibly feature them all here, but we’d be remiss if we didn’t mention . It’s a gripping epic, developing week-on-week, and we think you’ll love it at least as much as we do. America: keep writing!

If you’re looking for an excellently-written blog in which one runner is charting her progression through the game, let us introduce you to Eve Glass. You won’t be disappointed.

Walking the line between fanfiction, blog and artwork, we have an hilarious comic from Megacynics, completely nailing the dual experience of playing Zombies, Run!

One of our favourite pieces of fan art is up next: an incredibly evocative self-portrait by Robin Parkins. 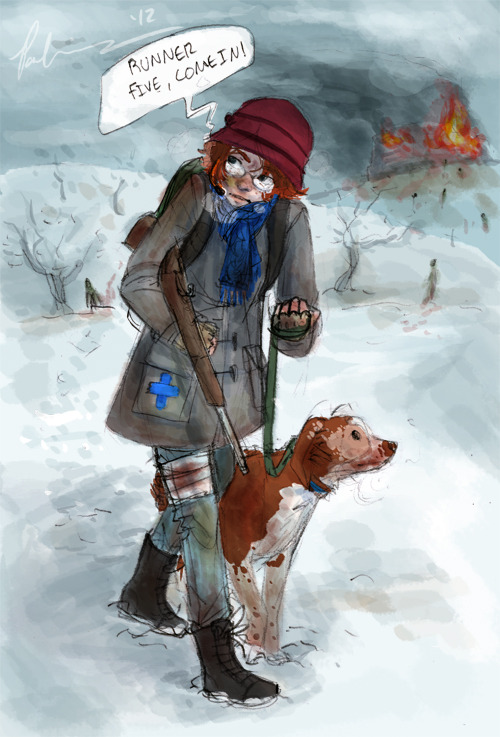 This piece has a lovely, rich style which just hints at the grim realities of life post-civilisation while managing to remain personal. Excellent.

To round out our art collection, here are portraits of ZR characters by the wonderful Brooke. It’s really great to see how Brooke’s pictured the characters: Jack and Eugene are surprisingly close to the real thing, and you have Janine almost spot on!

To wrap up: thank-you to all the fans out there who are sharing their love of the game with the world. We can’t tell you how much we love seeing what you’re up to.

Stay safe out there.

Yes – it’s not May, and it’s not Spring, either. But come Thursday June 14th, Zombies, Run! will be on Android! We’re really sorry that we aren’t able to release it any sooner – we want it to be out just as much as you do, so we’ve thrown all of our mobile development resources into Android to make that happen.

In order to make this release date, there are a few things that will need to wait until version 1.1 or later, including:

We don’t want the Android version to be lagging behind iOS indefinitely though, so we are hiring more people to help accelerate development on all fronts. 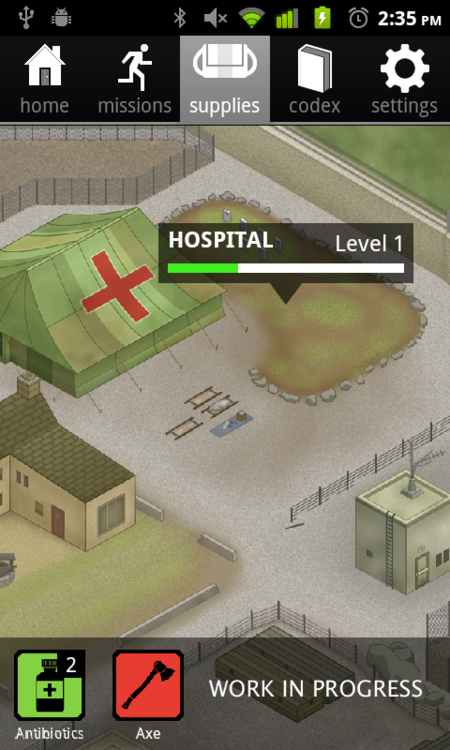 The good news is that on June 14th, all Zombies, Run! players – Android and iOS – will gain access to ZombieLink, our web-based syncing service. It’ll do everything you’d expect, like show your run logs and stats, and plenty of things that we’re sure you’ll be delighted by.

There’s more good news: we’re targeting Android 2.2+! This means that even fairly old Android phones should be able to play Zombies, Run! although obviously the actual performance may vary if you have a really old/slow phone.

Closer to launch, we’ll be emailing all Kickstarter backers and people who’ve pre-ordered Zombies, Run! with instructions on how to download and play the game. But for now… well, it’s only 28 days from now!

Which country loves Zombies, Run! the most? Let’s investigate!

We’re not about to reveal our exact sales figures, but this chart shows that like most apps, the US dwarfs the rest of the world, singlehandedly accounting for almost 70% of sales; Canada, Australia, the UK, and everyone else can only look on in envy.

But this doesn’t tell us anything interesting. We know that the US is a big country with 300 million people, we know that they have a lot of iPhones. So maybe there is a more useful way to slice and dice this data.

If you look at sales per capita – in other words, dividing sales figures by population and normalising (look at the red bars) then Australia emerges as the top dog, punching well above its weight with 25% more sales per capita than the US! They’re very closely followed by Sweden, Denmark, and Canada, with Norway a little further behind. Notable English-speaking laggards include the United Kingdom and New Zealand, who’re only selling at half the rate of the US. What the hell, Brits/Kiwis?

While sales per capita is a lot better than absolute sales figures, it’s not perfect. Some countries are richer than others, and some countries have more iPhones and and iPod Touches. If we want to see how well Zombies, Run! is performing, then we need to adjust our figures for the Addressable Market – that is, the number of people who can actually buy our game.

Apple don’t break down their device sales figures by country, but Flurry makes a good approximation in their iOS and Android Addressable Market charts from December 2011. Of course, we’re only selling on iOS (at the moment) but it’s better than nothing!

If you adjust for Addressable Market, the chart looks a bit different (look at the orange bars): Canada zooms into the lead without even a tip of the toque to its rivals in Australia, Sweden and Denmark.

This is a bit weird though – why does Canada increase its numbers so much when every other country stay more or less the same? The answer is simple: Canadians still have a lot of Blackberrys, the poor, deluded fools. As as result, they have fewer iOS and Android devices, so the number of sales per available devices is actually higher. I suppose there’s something to be said for patriotism, at least…

Time for some unbridled speculation!

Why is Canada so far ahead? It helps that they speak English (or so they say), a trait they share with #2 and #5 (Australia and the US) – and arguably they are culturally closer to the UK than the US.

But if it was just down to being culturally close to the UK and speaking English… why on Earth are sales in the UK low? Maybe it’s the weather – but then again, the weather in Canada isn’t that great either. Perhaps British people are just more conservative in their choice of games. Perhaps they’re not as keen on running. Who knows?

The other interesting finding is that Nordic countries love Zombies, Run! Some of this has to do with their high levels of English speaking and general outdoorsy nature, but maybe there’s also something about zombies that speaks to their tortured souls…

This data is accurate as of a couple of weeks ago